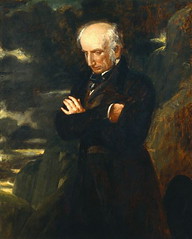 Note: To listen to audio of this post, please use the widget below or visit my Soundcloud page.

When William Wordsworth and Samuel Taylor Coleridge published their little book of verse entitled Lyrical Ballads in 1798, they revolutionized poetry in particular and literature as a whole. How? Exalted diction, highbrow subjects, stolid structures—all of these they whisked away like dust before a broom. In their place, Wordsworth and Coleridge put forward irregularly styled poems penned in everyday language that mostly focused on nature. It was common stuff that common folks could enjoy.

What’s more, Wordsworth also argued in the introduction to Lyrical Ballads that poetry should “follow the fluxes and refluxes of the mind when agitated by the great and simple affections of our nature.” And that meant that he believed verse ought to flow from out passions. It should be “the spontaneous overflow of powerful feelings.”

So what, right? Why should readers of a 21st century content writer’s blog care about the compositional convictions of a long-deceased Romantic poet? Here’s why: I think that Wordsworth’s framework is one that most of us have unconsciously adopted—and that it hurts our writing.

Stop and think for a moment about the failed writers you’ve known. I’m not talking about people with delusions of cracking the New York Times bestseller list, although the same point might apply. I mean folks who are always planning to finish that novel. Or play. Or short story. Or investment proposal. Or professional blog. Of course, they never do. I should know. I’ve been one of them from time to time.

So when you encounter these failed writers at work or in the coffee shop (or perhaps in the mirror), what reason do they give for abandoning their pet projects? I’ve heard various answers. Some say they got busy. Some have a new scheme that’s sucked up all their passion. Some may even, in a very quiet and honest moment, admit that the very difficulty of the task slowly stymied them. In the end, though, all the answers really boil down to the same thing: They ran out of passion. Writing seemed less about routing Wordsworth’s “spontaneous overflow of powerful feelings” onto a page and more like first chipping a channel out of bedrock with their pens. It was hard. It hurt.

This is where Wordsworth’s framework, that framework so many of us have unthinkingly chosen as our own, breaks down. And you know what? It broke down for Wordsworth, too. His output started to slow around 1820, and there was a 30-year drought of major works until the publishing of The Prelude in the year of his death. He only agreed to become Poet Laureate in 1843 when Prime Minister Robert Peel stated that “you shall have nothing required of you.” Critics have offered any number of rationales for why Wordsworth struggled, but I think the answer’s obvious. It’s hard to pick up the pen when passion is your only propulsion. And if there’s anything you can count on in your writing, it’s that your passion will fail. As William Butler Yeat’s wrote in “Adam’s Curse,” “It’s certain that there is no fine thing / Since Adam’s fall but needs much laboring.”

Veteran writers have a technique they’ve long used to overcome this dearth of desire. It’s called “derriere in chair.” Sit down. Sharpen your pencil. Get out your paper. Open your word processor of choice. Then start writing. It doesn’t matter if you only produce a single usable sentence. Any progress is acceptable—nay, essential. As novelist Chuck Wendig concluded, “Nobody’s saying you have to write thousands of words per day. You write what you can write. But that verb is still in place: write. Whether you write ten words or ten-thousand, they still involve you taking off your pants, setting your coffee onto its coaster, petting your spirit animal, then sitting your [expletive] into the chair and squeezing words from your fingertips until you collapse, unable to do any more.”

One thought on “Passion Is a Perk—Not a Prerequisite”